Can we convincingly test a IIS application before we publish it?

Other issues we addressed include: Can they be managed? Can they be remotely deployed? What are good business models? Handling exceptions. Roles in the organisation and making them happen. How to get server resources. Good software design.

Prerequisites: This material is for a specialised audience, which: 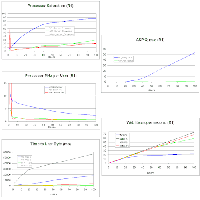 The recent introduction of IIS applications holds the promise of being able to easily create smart web sites. The technology looks exciting, but we have been disappointed before. So decided to check whether it could be used as required.

The approach is answer the question by doing it. This used a pathfinder project which:

Various analyses were run on the data obtained. These are illustrated below. Pretty as these may be they need some extra expert work to answer the question. We used our expert system and rating experience to yield a simpler answer.

That simpler answer is a performance rating against number of users. We created a measure that ranges from 10 to -10 where:

Among the contributors to this measure are user response time (TTLB - time to last byte), processor load per user (MHz per user) and a comparison against an ideal server. This simple measure emulated the analysis derived from a close examination of the contributing factors very well.

This finding is good enough to persuade us to move on. Improvement will be easy as the technique can be revved up with in-house skills.

The results appear to show that on the target 266 MHz machine and with limited functionality we can support 18 "hard users" simultaneously and 36 at a stretch. For persistent storage further analysis is needed.